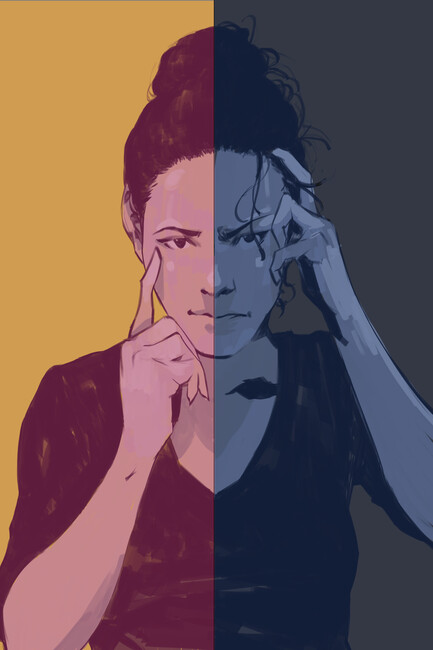 Envision the following scenario: you’re in college or at work, and you run into a friend during break time. You greet them in a cheery manner, only to receive a solemn nod in return. You try making small conversation, but they respond in a rather dry manner. Not wanting to force your company on them when they do not seem to be in a mood to socialize, you move on to other friends and spend the rest of your break with them. Now, there are two ways your brain can analyse and interpret the situation above:

1) “I wonder what was up with Sam (the aforementioned friend.) He seemed pretty distant today. Maybe he has some personal problems going on. Or maybe there’s been some misunderstanding and he’s a little put off with me. Or maybe he’s just in a bad mood. I’ll try asking him about it later.” You move on and get on with the rest of your day.

2) “Sam seemed so angry at me today! What have I done to him? He must hate me now. Should I confront him? Or should I act distant in return and wait for him to approach me? What if he never wants to talk to me again? There must be something wrong with me – everyone always ends up disliking me for one reason or another. I’ll probably always be alone since everyone keeps deserting me.” You spend the next few hours obsessing over all the reasons why they could hate you.

A person with an unhealthy thought pattern usually falls prey to cognitive distortions. These cognitive distortions are mostly caused by underlying mental disorders, such as GAD or PTSD. A person who has suffered a traumatic event, such as the sudden death of a loved one, has lived through their worst fear coming true. This can lead to them always fearing the worst-case scenario, and catastrophizing seemingly mundane situations. So, how can you deal with such thinking patterns if they plague you? Having formerly experienced many of these distortions myself, allow me to help you with them the way my therapist has shown me to so that you can finally begin rewiring your brain.

1. All or nothing thinking: This happens when a person thinks on the extreme ends of what is supposed to be a spectrum. You’re either destined for success, or you’re a failure. Your friend either loves you at all times, or they must hate you. Life is either all good, or all bad. If you fail a test, it means you’re a failure and will never be successful in life. If you have a fight with your partner, it means they now hate you.

The fix: Be realistic. It is impossible to get through life without failing a test or without having a falling out with a loved one. Remind yourself that this is a minor problem and that it does not change anything in the grander scheme of things. Develop “both, and-” reasoning skills. It is possible for you to fail a test AND graduate, or for you to have a fight with your partner AND continue the relationship.

2. Overgeneralization: This means that you take one isolated event, and apply the conclusion across the board. You have one bad relationship and assume you just aren’t good at relationships in general. In the above example, you assume everyone always ends up disliking you, just because one person was a little distant with you one afternoon.

3. Personalization: This is when you take external events beyond your control, and start revolving them around yourself. It is more likely that your friend has some personal issues which are distracting them, as opposed to them waking up one day and deciding they don’t like you. More often than not, situations have nothing to do with us, but people with this certain cognitive dysfunction tend to take everything personally and obsess over it to a painful degree.

The fix: Ponder upon what else could have contributed to the situation. For example, maybe your friend had a fight with their significant other. Or they’re having financial issues or mental health issues. Consider the likely possibility that their mood has nothing to do with you. Remove yourself from the center of the universe, and look for other logical explanations.

4. Mind Reading: This is when people assume what the other person is thinking. In the example above, the person with the unhealthy thought pattern assumes their friend hates them, even though there’s no concrete evidence to prove that.

The fix: Understand that there’s a good chance your guesses are wrong. Does your friend really hate you, or is it your own unaddressed insecurity projecting itself? Is there any evidence to back up your claim? Get more information, if possible. To put your mind at ease, ask your friend what’s wrong with them. Chances are, they’re probably just a little under the weather. Instead of reading their mind, get to the crux of the matter!

5. Mental Filtering: This is when you disregard the positives and focus only on the negatives. It is as if your mind has a filter, which only lets certain evidence in. You ignore the fact that you have plenty of other friends who like you, and wish to spend time with you. Instead, you ruin your mood and your day obsessing over that one friend who was distant. Because you believe that people don’t like you, you only let in the examples when this has happened, and dismiss all the times your friends have been there for you.

The fix: Examine your filters. Are you only focusing on the times when the evidence matches your core set of beliefs? For example, you believe you’re unlikeable, and as a result, only notice when your friend seems distant or busy. You barely notice all the times when they’ve been willing to hang out with you! Become more aware of the ‘positive’ events. Keeping in mind the above example, make note of all the times your friends have shown you they like you, either by inviting you somewhere or hanging out with you.

6. Emotional reasoning: This is a false belief that your emotions are the universal truth. You FEEL unwanted or unloved – hence this means you ARE unwanted or unloved. This cognitive distortion ignores factual evidence and instead considers their own emotion as the definitive reality.

The fix: Allow the feelings to subside before you form any opinion or take any action. Once the feeling of being unloved or unwanted has faded a little, reassess the situation from a neutral point of view. Just because you FELT something, is it really the truth?

7. Catastrophization: This is when you take one small incidence (like your partner not replying to your text, or a letter in the mail you’re waiting for that has been delayed) and start believing the worst possible scenario (like your partner has met with a fatal car crash, or the letter has been lost somehow and now you’ll never receive it).

The fix: Consider less terrifying explanations. In all probability, your partner hasn’t replied to your text because they got busy, not because they’re dead. Your letter, which was supposed to arrive today, is probably late due to harsh weather conditions and will arrive in a day or so. Try examining the evidence available to you. Where was your partner the last time they texted? If they were at home, or with friends, then in all probability they’re safe.

Although these fixes help greatly, they are still not a definitive cure for your obsessive thinking. However, there is a permanent fix  – Cognitive Behaviour Therapy. It is a form of psychotherapy that tackles the root cause of mental health disorders – the destructive thinking patterns that cause them. Unfortunately, CBT isn’t a quick fix, but it’s rather something that takes time and conscious effort on behalf of the patient but if your problems are not that aggravated, these quick fixes can prove to be life-altering!