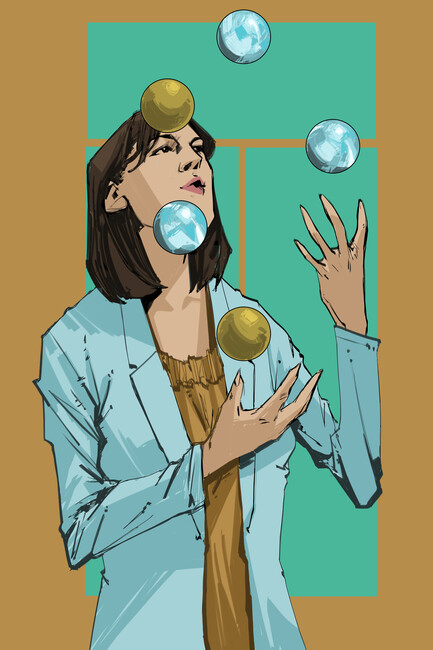 It is a truth universally acknowledged that a single med school student, in possession of a good fortune (of knowledge), probably has no time for a spouse (or partner, or friends.) Stuck in the violent whirlwind of assignments, tests and OSCEs, it is only natural to isolate ourselves from our non-medical peers and focus all our attention on the never-ending tasks at hand. After all, it is an understood notion that the words ‘med school’ and ‘social life’ are, more often than not, mutually exclusive. However, the years pass in a blur, and it’s only after you graduate and are standing on the precipice of adulthood that you look back and realize the one thing you missed out on all these years: human connection.

From the day you enroll, the trajectory of your life has been more or less pre-determined. If you think “I’ll study hard these 5 years and then party,” please think again, because it only gets harder from here onwards.  Whilst it is no secret that med school demands a real sacrifice of one’s time, it is important to remember that there is more to life than just studying. You see, it’s not just these few years that are tough. Medical is one of those careers in which the hustle never ends. So at some point, you’re going to have to ask yourself: For how long am I going to deny myself a very basic human need?

This realization hit me during 2nd year when I ended up missing my grandmother’s funeral because I had a test the same day and it ran late. Of course in hindsight, I should have missed the test, but in 2nd year I was an overachiever and couldn’t risk my overall percentage dropping. That was when it really hit me: med school is not worth sacrificing such moments for, nor is your lack of sacrifice going to significantly alter your future as a doctor (because even if I had missed that exam and lowered my percentage, it wouldn’t have changed much.) You will graduate, and you will become a doctor. But along the way, it is also important to not miss out on the people who may no longer be there by the time you’re ready to communicate with fellow human beings.

So, how does one manage to balance meaningful relationships with med school? The key is efficient time management, and knowing when to prioritize what. There is a quote by Nora Roberts that really resonated with me. When asked how she juggles work and kids, she replied that “the key to juggling is to know that some of the balls you have in the air are made of plastic and some are made of glass.” If a plastic ball falls (be it work-related or family-related), no big deal. But if a glass ball shatters, it is irredeemable. The trick is to figure out which balls are plastic, and hence can be easily dropped, and which balls are made of glass.

By prioritizing work glass balls (an important annual exam, an internship, a vital lecture that won’t be repeated again) over relationship plastic balls (a casual hangout which can easily be rescheduled, a night out drinking which will make you miss an important lecture, staying up late on the phone), you can ensure that you don’t cause any damage to your career. Similarly, by prioritizing relationships glass balls (a friend who is upset and needs a shoulder,  wedding celebrations, a funeral) overwork plastic balls (lectures which can be rescheduled, a test which has no lasting repercussions on your overall grade, studying extra hard whilst aiming for a distinction), you can ensure you don’t damage your relationships.

The key here is to know which balls are glass, and which are plastic. As a rule of thumb, anything which will alter the course of your career (failing an annual example, for example) is a glass ball. Similarly, when it comes to relationships, anything that will cause regret when you look back after a couple of years (like missing a funeral of a loved one, or not being there for a friend when they really needed you) is a glass ball.

Of course, given the undulating and harsh terrain of med school, it will be hard to implement this in reality. There will be times when you have to choose between two glass balls (a friend who needs comforting over something tragic, and an important exam that’s coming up), and the correct decision will vary according to the situation. During times like these, you really need to ramp up your time management skills. For example, in the above given hypothetical scenario, you can take out an hour for the friend, and switch to a call instead of texting (as more can be conveyed over a call in less time.) To make up for the missed hour, you can stay up an extra hour studying, or adjust it somewhere else in your study schedule (taking my book to the toilet with me has saved me a lot of time in the past.)

Obviously, no one expects you to perfectly balance the two.

Sometimes your career will suffer, and sometimes your relationships will. What is important is to realize that you have to at least strive for that balance. In the first year or so of med school, your instinct will be to leave off everything that isn’t related to the field of medicine and prioritize your career over everything. As understandable as that sentiment is (due to the years of hard work that went into securing your admission into med school), the sooner you find the flaw with that thought process, the better. Because, as I previously said, this is the beginning of the rest of your life, and it certainly doesn’t get any easier. Once you form the habit of prioritizing work over relationships at every given instant, it would not only cost you your loved ones in the longer run, but the habit itself will also be hard to break.

It is vital to remember that our careers, whilst a very important part of our lives, are not our entire life. As for med students and future doctors, trying to find a balance between work and relationships will be one of our greatest struggles. But it is important that we do find that balance, because, as Dean Ornish accurately observed: “The need for connection and community is primal, as fundamental as the need for air, water, and food.”