Why Your Therapist Can’t Be Your ‘Friend’ 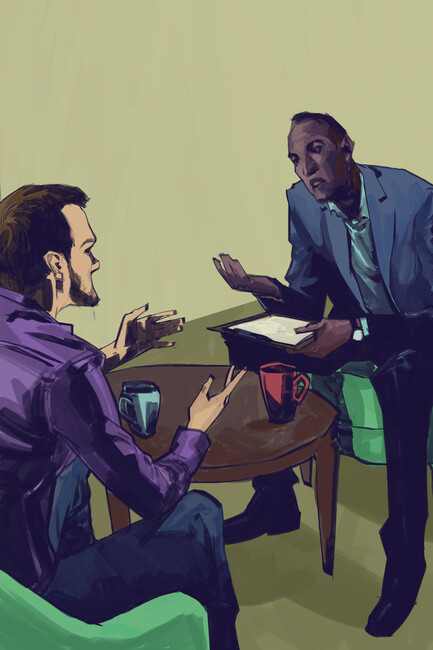 If you’re an aspiring psychiatrist and a fan of the new Netflix show ‘New Amsterdam’, you would agree that one of the most poignant scenes in the season was when an inquiry was launched into Dr. Frome (Iggy) for overstepping his boundaries as a therapist and getting far too invested in the lives of his patients. The inquiry was launched when a social worker witnessed a patient break down and fall into Iggy’s arms, who then proceeded to pat his back. Furthermore, he admits to buying his patients gifts and going out of his way to ensure they feel loved. Initially, my reaction mirrored Iggy’s – utter disbelief. Like, seriously? He’s helped so many patients. There’s no doubt regarding his abilities as a doctor – and if he’s ultimately successful, then where’s the harm if he just put his hand on a patient’s shoulder to comfort him as he’s crying, or hugging him back? After all, isn’t that a humane thing to do, as opposed to keeping on a cold mask of composure and watching from afar as your patient bawls their eyes out?

However, as the episode goes on to reveal, boundaries exist for a reason. The young patient later revealed he was a sexual abuse victim, and although he had nothing but respect for Dr. Frome, he admitted to feeling uncomfortable and a little triggered when Dr. Frome put his hands on the former’s knees during their sessions. Furthermore, Dr. Frome comes to the realization by the end of the episode that by buying his patients gifts, and going out of his way to care for them, and making them feel loved, he is actually training them to only be able to speak to him, in what he refers to as a ‘non-therapeutic relationship.’ (“If I’m only teaching patients to speak to me, and not to deal with the world after they leave my care, the phrase I would use for that is a non-therapeutic relationship.”)

As with every doctor-patient relationship, there are several clear-cut boundaries between a therapist and a patient that must be respected. These boundaries not only address the inequality of power in such a vulnerable relationship, but also strengthen the framework of the relationship by providing it with stability, predictability, and reliability. The relationship between a patient and a therapist is a unique one – the therapist is entrusted with the patient’s greatest vulnerabilities, but the two are not friends. The patient, more often than not, is bound to evoke strong emotions in their therapists, such as pity, lust, curiosity or love. This is known as counter-transference.

The opposite can also occur when the therapist evokes feelings in the patient and is known as transference. However, considering the power dynamics here, the onus is on the therapist to walk the thin line between what is acceptable and what is unacceptable in their relationship with their patient, and ensure that they keep a strong check on their relationship to make sure that the therapist is not undergoing counter-transference, nor subconsciously encouraging transference in the patient (like Dr. Frome did). The therapist must ensure no ethical boundaries are blurred. These boundaries include:

3) Not giving any practical advice to the patient.

4) Not getting emotionally invested in their lives.

5) Not going out of your way for one particular patient.

These rules may seem easy enough, but due to the nature of the profession, it is much harder to navigate safely around these boundaries when you throw emotions into the mix. When questioning the need for such stringent rules, it is important to remember that therapists are also human, with their flaws and shortcomings. In order for therapy to be successful, they mustn’t reveal those flaws or personality traits to the person who has entrusted them with access to the darkest crevices of their mind. Below are some hypothetical situations exemplifying why the aforementioned boundaries are necessary:

As medical students, we could be on either side of the desk in a therapist’s office. We could be the patient or the therapist in the future. Hence, it is vital to equip ourselves with awareness regarding what is considered ethical when it comes to a therapist-patient interaction. As a patient, we must be honest with ourselves if our relationship with our therapist blurs any of the boundaries stated above. If at any point, your feelings for your therapist start transgressing the ethical limit, or your therapist’s actions start encouraging such feelings, it is time to find a new therapist. Similarly, if, as a therapist, you start noticing the patient demonstrating any form of attachment towards you, it is your moral duty to do everything in your power to not encourage the transference. Rather, one should work with their patient to try to counter such feelings.

If that does not work, it would be best to refer the patient to another doctor. It is also necessary to keep a check on your own emotions and ensure that your interest in the patient never exceeds the amount that is considered appropriate. Otherwise, it could lead to disastrous consequences.

Of course, not every transgression will lead to a disaster. Sometimes, it may be harmless. However, the trouble ensues when the therapist starts considering themselves above the law or starts believing that they would not be tempted whatsoever. The problem with walking such a slippery slope is that, sooner or later, you WILL slip. So why take such a risk in the first place? Carl Jung rightly stated: “The transference phenomenon is an inevitable feature of every thorough analysis.’’ So for all of us budding psychiatrists/psychologists/therapists, let’s try to keep the analysis honest and thorough but not ‘too thorough’!