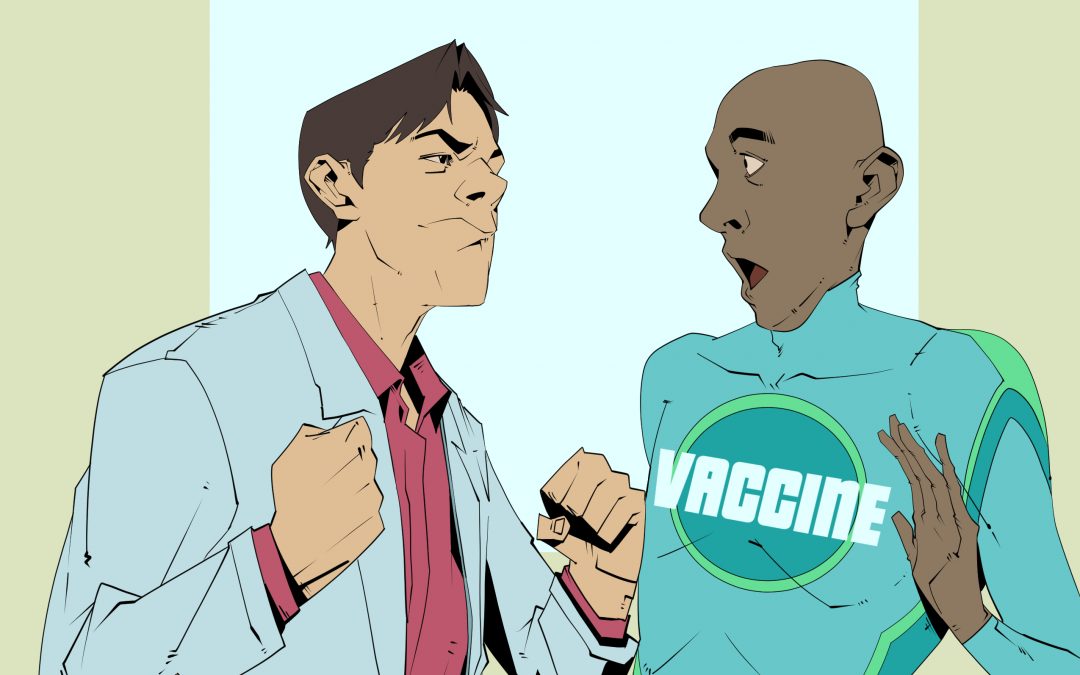 With the stormy 2020 transitioning into an equally ominous 2021, life has been anything but easy for most of us. The past year not only brought some nightmares, but it also gave birth to an abundance of unforeseen challenges. Whilst there are many contenders, there is little debate surrounding the fact that the biggest of them was dealing with a devastating pandemic that sent its ripples throughout the planet.

It is no secret that the fight against the menacing COVID-19 (caused by the SARS-CoV-2) has been barely successful. As evident from turning the pages of history books, such pandemics are dealt a resounding blow only with the advent of a vaccine. Unfortunately, with so much controversy surrounding the virus, many people are having a hard time trusting the vaccination process. Let’s proceed to shed some light over the matter.

What exactly is the process of vaccination and why do you need it?

As defined by the World Health Organization (WHO), vaccination is the administration of agent-specific, but safe, antigenic components that can induce protective immunity against the corresponding infectious agent. When the vaccinated person encounters this microbe, their immune system will respond with a quicker and improved immune response that usually prevents the disease from rooting in. When we vaccinate, we inscribe the pathogen in the ‘memory’ of the immune system. Through vaccination, a damaged microbe, a fragment, or something similar, is introduced to the body. Without us becoming ill, the immune system is then triggered and in an easy and efficient way, many harmful infectious diseases are avoided. WHO estimates that vaccination averts 2–3 million deaths per year (in all age groups), and up to 1.5 million children die each year due to diseases that could have been prevented by vaccination. This speaks volumes about the significance of this procedure.

Why do some oppose vaccines?

When anything has been deemed too good to be true, it has always been subjected to intense scrutiny. By extensively researching and reading up on relevant literature, I was able to narrow down much of the skepticism and criticism surrounding vaccines to 5 major claims. So instead of brushing aside these oft-heard concerns, we will attempt to analyze them under mankind’s most-trusted tools: science and rationality.

Claim 1: Vaccines make you sick by injecting the virus in you.

It is true that some people occasionally experience mild symptoms like soreness and pain at the site of the injection accompanied by a low-grade fever, however, the symptoms don’t persist. Vaccines are often either killed (inactive) or live-attenuated (active) forms of the virus which are injected into a healthy individual in order to equip him or her with active immunity.  Even live-attenuated vaccines contain modified virus so that while it can produce immunity, they cannot cause the illness. Severe side effects are extremely rare and occur in about 1 out of every 100,000 vaccinations and typically involve allergic reactions that can cause hives or difficulty breathing. Therefore, it is safe to state that the overwhelming majority of people benefit greatly from being vaccinated. According to the American Academy of Pediatrics and the American Academy of Family Physicians, the chance of contracting the disease from its vaccine is slim to none. So, although the virus is indeed injected into your body, it is only done with its weakened or killed form in order to bolster your immunity.

Claim 2: Vaccines cause autism in children.

This oft-heard claim has its roots in a popular 1998 study which suggested a possible link between the MMR (Measles-Mumps-Rubella) vaccine and autism. The research was later found to be fraudulent and was not only completely discredited but was also retracted by the journal that published it. However, the damage dealt by this misleading paper, unfortunately, stood the test of time as a 2016 study showed that 16.5% of parents/legal guardians/caregivers of autistic children believed vaccines to be the cause of their child’s autism. On a more hopeful note, a 2002 Danish study using a huge sample size of 537,303 children put forth strong evidence that disproves any correlation between MMR vaccine and autism. Moreover, a 2019 study of almost 700,000 children over a ten year period similarly reinforced that there was no connection between vaccines and autism. The research stated that there was no link between the age at the time of vaccination, the time since vaccination or the date of vaccination and the development of an autistic disorder. Using such large sample sizes and advanced research methodology, these studies effectively settle the debate surrounding this issue.

Claim 3: Getting multiple/combined vaccine(s) at a time is potentially hazardous.

Since an increased number of vaccines translates to an increased viral load in the body, the concern about getting multiple vaccines is logical and understandable. Fortunately, it is nothing that should unsettle you, as credible scientific literature shows that getting several vaccines simultaneously has no adverse effects and  is completely safe and healthy. This is supported by a 2015 study which evidenced that around 99% of pediatricians were in favour of combined/multiple vaccines. In addition, they save time and money, as getting multiple shots in a single sitting is less time-consuming than having the vaccination process spread out over a period of several months.

Claim 4: Naturally acquired immunity is much better than the artificial immunity afforded by vaccines.

Vaccines basically elicit an immune response in the body which is similar to the one elicited by potent viruses, but with an amazing bonus: without bearing the brunt of the disease. Natural immunity, however, comes at a pretty high cost. The price paid can be as high as mental retardation from Haemophilus influenzae type b (Hib) to liver cancer from Hepatitis B Virus (HBV). To think that such serious diseases can be prevented by simply getting vaccinated against them is marvelous to say the least! All vaccines provide you with the protection you need when administered in the recommended quantities. In some cases, a single natural infection may cause a higher immune response than a single vaccine, which is why some vaccines require multiple doses, or ‘boosters,’ in order to ramp up the efficacy.

Claim 5: The COVID-19 vaccine is a ploy to implant microchips in people all over the world.

No matter how laughable this might sound, this myth should be taken seriously because this has become a painfully well-known conspiracy theory, jeopardizing the health of many who are avoiding vaccination as a result. Sadly, a recent poll back in May 2020 suggested 28% of Americans believed that Bill Gates wanted to use vaccines to implant microchips in people. Not only is this accusation scientifically impossible given today’s technology, it further maligns Bill Gates without any factual, intellectual or scientific backing. The internet has proven to be an indispensable tool, but everything available on the web isn’t completely trustworthy. Confusing times, especially a pandemic, serve as fertile ground for incredulous conspiracy theories. Therefore, it is an onus upon everyone to verify information before promulgating it. When it comes to rumors regarding healthcare, it is much better to ask a licensed doctor instead of viral messages on WhatsApp.

As we have discussed above, the claims are mostly due to lack of proper knowledge or by falling for popular conspiracy theories. Although this list of claims is by no means exhaustive, it aims to scrutinize some of the most popular ones which are relevant to almost all the vaccines with the exception of the final claim. By separating facts from fiction, I have laid it all out in the open and hopefully made the verdict much easier for you. Vaccines: Friends or Foes? You decide.