Surviving Med School With GAD (and much more) 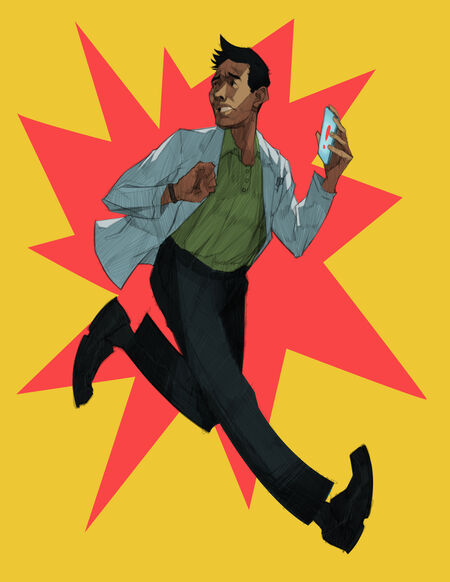 Anxiety is our body’s natural response in the face of a perceived threat. For our ancestors, it would trigger a fight or flight response which would save them from becoming the next snack of a nearby wandering predator. (Un)fortunately, due to the scarcity of such dangers in our everyday life, all a rush of anxiety really manages to do for some of us is ensure repeated trips to the bathroom.

A moderate amount of anxiety is normal – healthy, even. But what happens when your life is plagued by excessive, intrusive thoughts about how you may have left the oven on, and how the train you’re commuting in right now may crash? How your partner hasn’t texted you for 3 hours, which obviously means she’s been involved in a car crash somewhere, and how your friend’s tone yesterday just didn’t sit right with you, which MUST mean he secretly hates you? When your body’s reactive mechanism starts erroneously perceiving every stimulus as a threat, your brain ends up being caught in a snowstorm of worries and what you get is a stamp of Generalized Anxiety Disorder.

Generalized Anxiety Disorder is defined as an anxiety disorder characterized by persistent, excessive and uncontrollable worrying over everyday events. As a result, a person is unable to ever feel relaxed or be at ease. Just when you sit back in a bubble bath with your scented candles lit, desperate for a moment of peace, your brain ‘PINGS’ like a facebook notification, reminding you of how there is nothing stopping your family from suddenly perishing in a sudden house fire. This constant state of anguish is torturous for any individual, but what happens when that individual also happens to be a medical student?

Med school is excruciatingly difficult even for a person without anxiety, but for a person who already has a truckload of pre-formed worries stored in the back of their mind, it is a different level of hell altogether. Looking back, when I was diagnosed with GAD at the start of first year (after a series of ‘asthmatic attacks’ which turned out to be panic attacks), I never thought I’d make it through med school. But now, halfway through my final year, I am beyond grateful that I managed to make it this far. I’m writing this article in the hopes that I may be able to help others like me, and give advice that I really wish someone had given to me when I needed it. So, how do you survive 5 years of med school with such a debilitating condition?

If you’ve already met with one, kudos to you. It’s much easier to cope with a disorder once you know exactly what it is. But if you’re struggling with symptoms of GAD and haven’t yet gotten an official diagnosis, then go see a psychiatrist as soon as you can. Mental illnesses are usually a buy-one-get-seven free deal. There’s a good chance your GAD is accompanied by other disorders (i.e social anxiety, panic disorder and major depressive disorder in my case.)

Furthermore, it’s important to rule out any underlying physical illnesses which may be causing your symptoms (i.e hyperthyroidism mimics anxiety symptoms.)

Once you have a solid diagnosis, it’s important to know how to navigate your way through the kaleidoscope of emotions you encounter daily. A therapist will not only train you in the art of Cognitive Behavioural Therapy but also help you trace your anxieties back to their triggers. No matter how vague anxiety seems, it can usually be traced back to a specific trigger. Once you figure out what that is, it becomes so much easier to deal with it! As someone who never had much faith in therapy and made all sorts of excuses to avoid going, I can assure you that it is life-changing. Consider it physiotherapy for the brain – you start off with simple exercises. They may seem pointless in the grander scheme of things, but before you know it, your coping skills have improved immensely.

If your doctor has prescribed you any medication, then be regular in taking it. If you are hesitant about starting medication like I was, then feel free to do your research! Mention your concerns to your doctor, and talk them through. Seek a second opinion, if that puts your heart at ease. Most probably, the doctor will start you off on a minimum dose. See how that goes, and then increase it slowly under your doctor’s guidance if he feels like you need it. If you have any concerns regarding any of the side effects, then discuss them with your doctor. If a certain side effect is unacceptable for you, the doctor can conveniently switch you to a different drug.

This sounds pretty generic, I know. But I cannot stress the importance of exercise enough. Not only does it release endorphins, it also exhausts your body, thereby helping you fall asleep easily. This is the one thing I’ve struggled with the most throughout med school due to the lack of time, but exercise doesn’t have to be high-intensity workouts in the gym. It could be as simple as walking more instead of driving, or using the stairs instead of the lift where possible. One thing that really helped me was counting my daily steps. Once you set yourself a goal of a certain number of steps daily, it becomes easier to rise to the challenge and take those few extra strides around the campus just to reach your goal. Of course, that’s just the bare minimum, but if you can go for a morning run, or join the local gym, it would be of immense benefit, not only to your body but to your mind as well!

Most patients with anxiety also suffer from sleep conditions such as nightmares, sleep paralysis, nocturnal panic attacks, etc. Lack of sleep not only exacerbates your anxiety during the day, it also takes a toll on your physical health. Take care of your sleep hygiene. Avoid working or studying on your bed, so your brain associates the bed solely with sleep and relaxation. Avoid screen-time before sleep (which means no scrolling through memes on Instagram for hours every night), and sugary snacks.

During my first two years of med school, I was a high-achiever. I’d pull all-nighters before every exam, and count on the anxiety-induced adrenaline rush to keep me awake during the exam. But, the first two years of med school was also when my GAD was at its worst. I may have scored higher, but it was at the expense of my mental and physical health. Not the best bargain, trust me. After starting therapy and medication, I learnt to take med school at a slower, more peaceful pace. My grades slightly fell, sure. But I still scored decently, and that’s all that matters. No one will ask you, 5 years from now, what you scored on a random pharmacology test in 3rd year. Seriously, no one cares. However, the benefits of a sound and stable mental health are long term, and will help you even years from now. What’s the worst that could happen? Failing an exam or two may seem like the end of the world at the time, but it’s important to look at the bigger picture, and realise how unimportant it is in the greater run. You’ll have many more exams that you will pass, and many more achievements to come your way!

In conclusion, GAD may be a lifelong condition you’re stuck with, but it is one that can be managed if you’re willing to seek help. If there is any upside to having GAD, it’s that once you go through the rigorous training exercises included in CBT, you end up more aware of your emotions and actions, and hence better at controlling them than you would’ve been had you not been anxious in the first place. The path won’t be easy, but as Franklin D. Roosevelt rightly said: “A smooth sea never made a skilled sailor.”