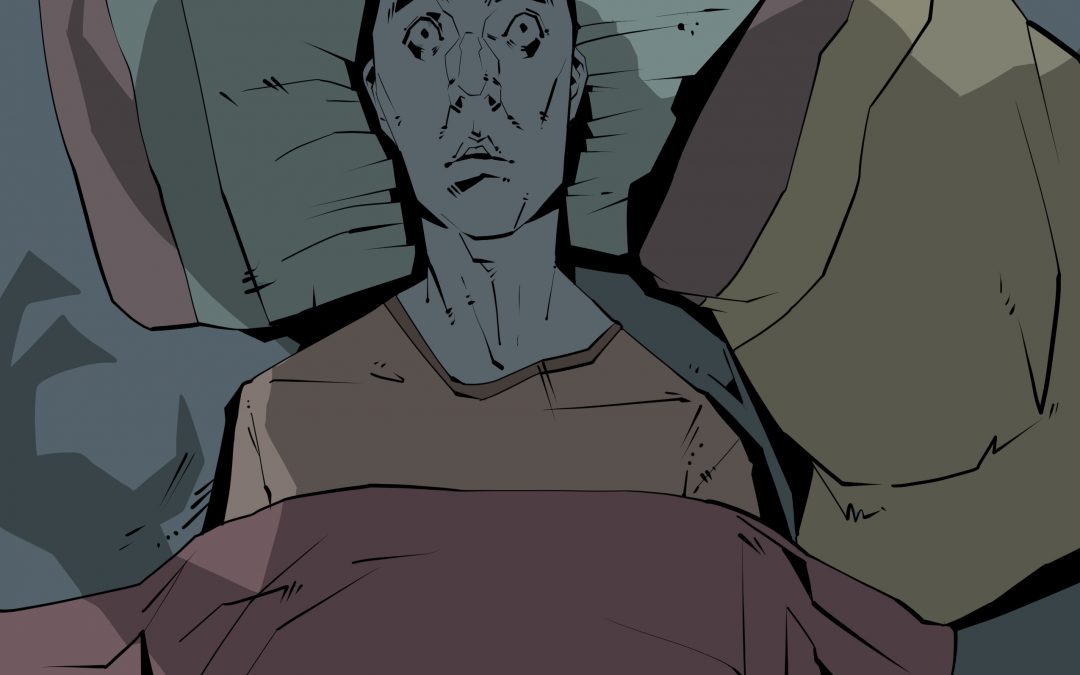 Envision this: you suddenly wake up from deep slumber and to your shock, you sense an evil presence nearby. You try to switch on your bedside lamp, but you realise you cannot move your limbs. As this horrific realization washes over you, you come to terms with the fact that you are completely paralyzed. Meanwhile, the ominous presence draws closer. You try not to panic. You focus on regaining your strength, and put all your energy into trying to lift just a finger. But alas, to no avail. Out of the corner of your eye, you can make out the demonic entity. The figure inches closer to you. You try to scream, but your mouth refuses to budge, and the next thing you know, you are out of breath. Your lungs struggle to smuggle air inside, but there is an intense pressure on your chest. You gasp and sputter as the evil figure stares into your eyes, standing a whisker’s length away from you. A crushing wave of panic rises up inside of you as you try to force in some air. Once again, you try to gather your strength and…finally. You sit up in the dark, gasping and sweating, as you pant and hyperventilate. The demon has finally disappeared.

The above scenario is, unfortunately, neither a mere dream nor an excerpt from a gothic novel, but something that I personally experienced back in my first year of med school. Although this specific experience is by far one of the worst episodes I have had to endure, it doesn’t end there. I have been plagued by ‘Recurrent Isolated Sleep Paralysis’ for as long as I can remember and when I looked it up online, I found out that I was not alone in this. Knowing the gravity of this disorder, I believe that this is a discussion that we need to have.

Throughout the ages, cultures around the world have conjured up various different conceptualizations of evil beings in an attempt to explain a rather terrifying but surprisingly common phenomenon known as sleep paralysis. The most common explanation found in the Middle East is that of a ‘Jinn’, which sits on your chest as you sleep and tries to suffocate you. In Italy, it is known as ‘The Night Hag’. In South Africa, it is believed to be caused by black magic, involving malevolent dwarf-like creatures known as ‘Tokoloshe’. But what exactly is sleep paralysis, and is there a biological explanation for this supposedly paranormal experience?

Sleep paralysis is the feeling of being conscious, yet unable to move. It usually occurs when one is either falling into deep sleep, or waking up from deep sleep. The affected person cannot move even a finger, although the person is conscious and aware of their surroundings. The experience is made worse by the visual and auditory hallucinations they may experience (such as seeing an evil entity sitting on your chest). Furthermore, the person often feels as if they cannot breathe, and experience a crushing pressure on their chest.

As explained in “Spatial Characteristics of Hallucinations” by J.A Cheyne and T.A Girard, there are three main forms of hallucinations one experiences during an attack: Intruder consists of the anticipation of a threatening presence nearby, usually accompanied with visual, auditory and tactile hallucinations. Incubus consists of the feeling of breathlessness and pressure on your chest, often accompanied by a sense of choking, strangulation and suffocation. The third form is Vestibular-Motor experience, which is characterized by feelings of floating, flying and out-of-body experiences. The former two are usually characterized together, as they are both correlated with feelings of fear and a perceived threat nearby, whereas the third one is generally related to feelings of ‘bliss’.

The science behind this phenomenon is fairly simple. When we are transitioning into and from deep sleep, the brain experiences a stage of sleep called rapid eye movement aka REM. REM is the stage which resembles wakefulness closely; our brain activity, heart rate and breathing increase, making this stage virtually indistinguishable from wakefulness. This is also a stage during which we experience dreaming. To stop our body from acting out in response to these vivid dreams, our brain has a rather simple solution: it paralyzes our muscles. Sleep paralysis occurs when an individual alternates between reality and dreaming, and ends up getting stuck in a blurred state between the two. Your mind has started to wake, but you are still stuck in REM. When this happens, the vividness of dreams is combined with the reasoning of wakefulness, and we end up with a nightmare that quite literally comes to life.

According to a research conducted in 1999 by J. Allan Cheyne (Hypnagogic and Hypnopompic Hallucinations during Sleep Paralysis: Neurological and Cultural Construction of the Night-Mare), the experience related to ‘Intruder’ can be explained by amygdaloid activation (the part of the brain that drives the ‘fight or flight’ response), which results in a hypervigilant state, in which there is a bias towards perceived threat or danger. During REM, we experience short bursts of activation passing from the brainstem to the thalamus to the amygdaloid. Under normal circumstances, this thalamo-amygdala pathway ensures a quick, coarse analysis of external stimuli to figure out whether there is an external threat which needs a reaction from the body or not. This analysis is rapidly authenticated by analysing the characteristics of the threatening stimuli and confirming its nature and gravity. However, due to the lack of any external stimuli, the threat cannot be corroborated, resulting in a prolonged state of heightened anxiety, which then sets the atmosphere for hallucinations.

The research further goes on to explain the Incubus phenomena: during REM, our breathing is shallow and rapid, often resulting in hypercapnia and hypoxia. During a sleep paralysis episode, the person will try to breathe deeply. However, due to paralysis of the thoracic muscles, they are unable to control their respiration, and this is interpreted as a feeling of ‘pressure’. Furthermore, constriction of the airways and general hypotonia will lead to the sensations of ‘suffocation’ and ‘choking’, exacerbating their panic.

As frightening as this experience is, the good news is that it is completely harmless. Even though the individual may feel as if they cannot breathe, that is not the case. The breathing is simply irregular and shallow, but it does not stop completely during the paralysis. Medical research hasn’t yet figured out exactly why this frightening phenomenon occurs, but it has been linked with several medical conditions, such as narcolepsy, anxiety disorders (i.e PTSD, GAD), insomnia etc. Furthermore, it can be exacerbated by a sudden disruption or change in your sleep cycle, increased levels of stress and, for some unknown reason, by sleeping entirely on your back.  According to a research published by J.A Cheyne in 2002, the supine position was the most common sleeping position during a sleep paralysis episode in over 50% of the subjects.

Unfortunately, there isn’t a quick fix to this. Management is aimed at eliminating, or reducing, the risk factors which lead to episodes of sleep paralysis. This includes:

1)     Correcting your sleep schedule and getting a decent amount of sleep each night.

2)     Reducing your stress levels, by either indulging in self-care or by visiting a therapist.

6)     See a sleep specialist to rule out other medical conditions such as narcolepsy.

One thing that really helped me when I was struggling with this was to practice good sleep hygiene, which includes taking measures to keep a stable sleep schedule, keeping the room at a comfortable temperature, avoiding electronics just before bed, and aromatherapy. Eventually, the terror associated with the hallucinations wore off, and the last time I was visited by these demons, I groaned ‘not right now’, and went back to sleep.

In conclusion, even though it makes a great spooky story to tell your friends, there is surprisingly nothing supernatural about a demonic entity trying to choke you whilst you’re paralyzed in bed. It’s just one of the more fascinating ‘glitches’ experienced by the brain, in which dreams spill over into the realm of reality, allowing you to experience macabre visions in immersive 4K.