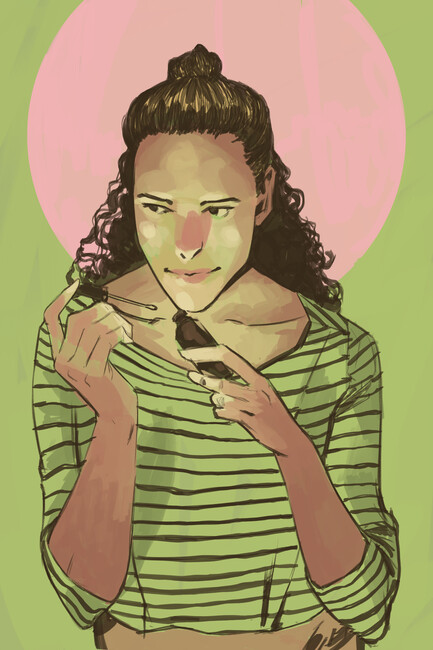 “Odors have a power of persuasion stronger than that of words, appearances, emotions, or will. The persuasive power of an odor cannot be fended off, it enters into us like breath into our lungs, it fills us up, imbues us totally. There is no remedy for it.”

The first time I ever watched the movie Perfume, based on the classic novel by Patrick Suskind, it felt like a wild fever dream playing out in front of me. The plot began with the antagonist of the movie falling in love with a woman’s scent, and accidentally killing her in the attempt to sniff her. In an obsessive pursuit to ‘capture’ and create the ‘perfect scent’, he goes on a killing spree, capturing the scent of each woman he kills. In the end, he finally gets caught after he murders the daughter of an important political figure (the final and most important ingredient of his perfume). However, just before he is executed, he releases his created ‘scent’ upon the masses, who are so addled by the powerful perfume that they do the only thing that makes sense at that moment – indulge in a mass orgy. This allows the killer to escape, but after coming to the conclusion that no one would ever love him, he pours the perfume over himself, which drives everyone around him into a frenzy and they eat him (yes, you read that right).

Aromatherapy is the practice of using essential oils for therapeutic purposes, such as for anxiety, stress, depression and the likes. It is a pseudoscience that has been used for centuries. The essential oils used therein are extracted from various plants using steam or water distillation. The oil is then left to cool and consequently condense. Essential oils are highly concentrated extracts of the plants, so they should only be used sparingly. But what exactly do they do, and do they actually work?

Essential oils can be directly inhaled, such as via a scent diffuser, body oils, or aromatherapy accessories that you can sniff throughout the day. They can also be absorbed by the skin, e.g. a massage therapist may add a drop or two on your body to aid relaxation, or bath salts may include some lavender oil to add to the soothing effect. The strong scents supposedly help a person relax, and aid them in overcoming a myriad of psychological problems such as stress, anxiety, depression to name a few.

Several studies over the years have reported that aromatherapy has proven beneficial, and has helped in the alleviation of mood, anxiety and sleep. For example, according to a research study conducted in 2016 by McKinley J. Sangwin on a group of stressed-out college students, 2 weeks of aromatherapy resulted in reduced levels of anxiety and stress and increased quality of sleep in previously stressed-out students. Another research conducted in 2015 by Ezgi Karadag revealed that lavender oil not only improved sleep quality among patients with coronary heart disease, it also alleviated some of their anxiety symptoms. How does this work?

When you smell a certain oil, the molecules of the oil stimulate olfactory receptors. These signals are conveyed to the olfactory bulb and further carried to the olfactory cortex by the mitral cells, which allows you to recognize and perceive the scent. However, the signals by the mitral cells are also carried to other areas of the brain’s limbic system, such as the amygdala – the part of the brain associated with emotions and memory. The olfactory pathway involves the amygdala in its primary processing pathway (so maybe Patrick Suskind was really onto something here?).

In fact, it is one of the most characteristic features of human olfaction to vividly evoke memories and trigger visceral experiences. It is why certain smells trigger certain memories – so if the smell of lavender triggers happy memories for you, then sniffing on lavender is bound to relax you during times of stress by reminding you of the happy times. For example, something that really helps soothe me during times of extreme exam-induced anxiety is the scent of lavender. Lavender evokes happy memories in me, so it is a ritual for me to light up some lavender-scented candles when I am too anxious and just sit back and relax. If it is too hot for candles, then I pour a drop or two in my scent diffuser and relish in the happy flashbacks. Other scents that I would definitely recommend include Jasmine, Chamomile, Lemon and Basil.

Of course, aromatherapy cannot ever replace medical therapy for conditions that need proper treatment. There isn’t enough medical literature to suggest that essential oils can have guaranteed therapeutic effects for physical conditions – such as headaches, body pains etc. This article addresses only their therapeutic use in the alleviation of stress and anxiety. It is also important to note that this is just an ‘add-on’ therapy – it cannot replace medical treatment of psychological disorders. If you have a mental disorder, it won’t be fixed by sniffing oils; you should consult a psychiatrist and seek proper treatment. Furthermore, it is vital to remember that the FDA doesn’t regulate essential oils, so be careful before you buy them! Only purchase them from a trusted store, and ensure they don’t contain synthetic chemicals or fragrances (which could end up giving you a headache instead of relief from anxiety.)

Conclusively, aromatherapy is an emerging field that definitely needs more research. However, there is no doubt that there is a strong link between our olfactory sense and our emotions, and hence the use of certain scents to stimulate certain emotions is an anxiety-relieving tactic that definitely should be explored more intensively.

Things to Consider When Choosing a Medical Specialty

Residency Interviews – How to Conduct Yourself

5 Things to Consider When Ranking a Residency Program